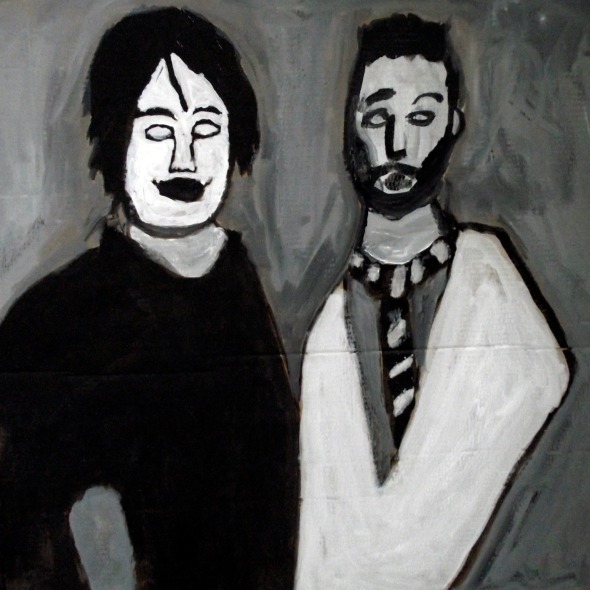 The final release by Cath’n’Dad records before we unleash the double monster that is “So Claw/Sour Crow” on the world. This badboy is a collaboration between one John Perry and Wednesday Club collaborator Oliver Robinson.

I first knew of Oliver Robinson way back in 1998 when we went to big school and he had bleached blonde hair and I played rugby and had a skinhead. We first talked in 2000, arguing the relative merits of The Smashing Pumpkins (him) and The Smiths (me) – as I recall we both got very angry. Then in 2002 we started talking music, Oli was one of the few people who liked my outre keyboard-played–wth-feet recordings. For the next 3 years Oli became my musical director and I, well, I listened to his songs. Then we formed a band with some other people. Then that band broke up and then… In the summer of 2008 Nir (vana) were born!

Ah those gilded days, as we strummed away on our respective guitars, talking of a future we knew would never come but we yearned for any way. Nuzzling into each others bellies and drinking sweet tea by the lake. Memories.

But I digress, this was to be a straight musical collaboration between me and he. Firstly we recorded an album of twenty minutes length one balmy summer day in 08 after hearing our friend Geoff Peff’s album “Suggestions Excerpt”. Then we tried to do it again the year after but only got half way because I was too miserable and had to go home. Then we tried to do it again later that year but Oli was too tired and had to have a nap.
Then I started to send Oli “raps” I did and he made beats for them. Folk was so over. Then it was tacitly agreed I couldn’t rap and we never spoke of it again.