Lisa Bouvier Westerlund (May 27, 1971 – April 25, 2002) better known by her stage name Left Eye, was an American rapper, singer-songwriter, dancer, musician, television hostess, and actress. She is best known as a member of the R&B/Hip-hop girl group TLC.  Westerlund contributed her self-written raps to many of TLC’s hit singles, including “Ain’t 2 Proud 2 Beg“, “What About Your Friends“, “Hat 2 da Back“, “No Scrubs“, “Waterfalls“, and “Girl Talk“.

The Genealogy of Motherlover

Pop music. We enjoy it. We dance to it. It infects our brains as earworms. But how seriously do we take it? Do we engage with the serious questions it throws up?

Yes, some songs that raise serious questions in their titles and these are answered as a matter of course, e.g;

Travis – Q: “Why does it always rain on me?” A:”because you lack an umbrella”.

Bob Dylan – Q: “How many roads must a man walk down before you can call him a man?” A: 42 (as any fan of The Hitchhikers Guide To The Galaxy knows)

and so and so forth.

But what about the questions implicit in songs? These are the one’s that go unanswered. For example the Hollies sang, “He aint heavy, he’s my brother.” Yet we still do not know how heavy (or light) the brother in question was.

Who shot the Deputy?

Which leads me to The Lonely Island’s pop opus “Motherlover”.

Please take a second to familiarise yourself with our source material by clicking the link below, before we continue.

We know the boys are going to sleep with each others mothers. In fact they further this with the aim of impregnating each other’s respective mothers. All well and good. But the implicit question remains: What will the genealogical connection of these theoretical children be?

Firstly, we should set out the relationship between Andy Samberg, Justin Timberlake and their respective mothers.

We can clearly see that Mother Samberg and Mother Timberlake are Andy and Justin’s mothers, respectively.

Now if Andy and Justin were to mate with each other’s mothers and produce offspring our diagram would look a little like this. 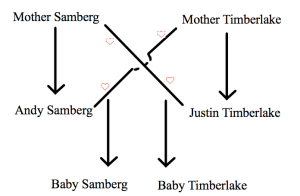 Here it might be useful to define to our symbols: A downward arrow denotes parentage. A horizontal line with a heart denotes a sexual relationship that produced offspring.

Now, whilst technically accurate, Fig 2. does not really help us determine relationship. We must therefore, look at the cases of Baby Samberg and Baby Timberlake separately.

From Fig 3. and Fig 4. we can see the following

Assuming marriage between a) Mother Samberg and Justin and b) Mother Timberlake and Andy we would have:

ii) Justin and Andy would be each other’s respective Father in Laws.

iii) Mother Samberg and Mother Timberlake would be each other’s Mother in Law and Daughter in Law.

But what about Baby Timberlake and Baby Samberg. Combing Fig 4. and Fig 5., with Baby Timberlake as the end product and avoiding any unnecessary repetition of participants, we have the following:

and if we take Baby Samberg as the end product we have:

From Fig 5. and Fig 6. we see that Baby Samberg and Baby Timberlake are each others half-uncles and half-nephews; One’s mother being the other’s grandmother and vice-versa.

We can extend this further by considering both Mother Samberg and Mother Timberlake’s parentage and comparing these directly for both Baby Samberg and Baby Timberlake:

Finally, we may ask ourselves, what is the genetic relationship between Baby Samberg  and Baby Timberlake. Assuming we share 50% unique DNA with our full siblings (receiving 50% of our father’s DNA and 50% of our mother’s with the DNA given being normally distributed), then a child will share 25% of the DNA of one of it’s parents.

Adding these together we can see that Baby Samberg and Baby Timberlake will share 25% of their unique DNA. The same as half siblings.
In conclusion, it would be inadvisable for these Babies to mate as their offspring would have considerable risk have genetic illness.

Dead Penny and The Insect Guide

A double whammy here. Firstly Adam and John (well mainly Adam – the Andy Samberg of our little group) were “interviewed” by Dead Penny and they did a little cover version of an Insect Guide song, “6 Feet In Love” for them.

The Insect Guide liked our lil’ effort and have released it as a free download split single with the original.

Perfect Example and Me

Leeds’ Legends The Seven Inches like to sing. Whilst I do greatly enjoy Ariel Shragg’s Potential, today I would like to talk about one of my favourite comix, John Porcellino’s Perfect Example.

Named after a Husker Du song, this is an autobiographical tale  of the months before John P. finally decides to go to University, with all the aimlessness, girls and confusion that entails. It also has the added benefit of undiagnosed clinical depression. I think this perfectly encapsualtes the time for me, and is perhaps the one book I’ve most been able to empaphise/relate with/to . Even the author is referred to as John P. throughout…

It’s drawn in a very simple pared down style, which allows the story telling and emotion to shine through…. Actually if you want a proper review google the book, you’ll get a better idea from that than from me. I suppose I really wanted to use this as a springboard to talk about my own experiences. So the rest of this “review” is “Perfect Example is awesome and here’s what John Perry did when he was 18.”

So I was 18 ten years ago and remember, much like John P., being desperate to get out of my home town. From the start of my final year of school I think that’s what kept me going. He thinks, “I bet everyone in college listens to Husker Du” and that wasn’t far off for me. I didn’t know what to expect but assumed that everyone there would love Captain Beefheart and Neutral Milk Hotel. Obviously that wasn’t the case. It was mainly discovering the joys of laundrettes and listening to people talk about football – it being the year of Arsenal’s Invincibles. Actually I did have a housemate who was exactly like I expected but that’s another story…

That was pretty much it for me. Except I didn’t realise this wasn’t normal. I remember when a mental health charity came to school in 6th form to talk about depression. They gave you a checklist to see if you had it. Things like “I think everything is pointless” or “I feel sad most of the time”. I laughed at it and commented to my friend “that’s what being a teenager is” and assumed that was just how everyone felt and these people were clowns. You can lead a horse to water…

As I turned 18 I became more withdrawn and yes, had increasingly growing crush on a girl. John P. also had this even having the guts to ask her out (I never did) but she starts going out with his friend, leading to some horrible “gooseberry” moments with the three of them. He starts seeing another girl and doesn’t know how to feel any more. I suppose I did start going out with the girl I liked in school. But, I will quote John P. again,

“I guess I should feel really happy… I’ve wanted a girlfriend for so long. But now it’s right there in front of me… It’s like I won’t let myself be happy…” 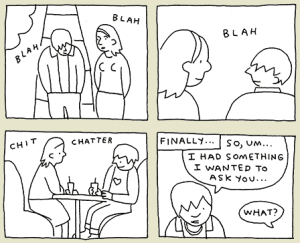 I may be making the book sound depressing and a downer throughout. honestly, it isn’t. I started writing this before re-reading and I’m still shocked by  how effortlessly excellent the comic is.He does this all with such an incredible lightness of touch and with such a simple style that his description of depression don’t seem depressing. I can only admire his honesty and lack of pretension.

For example here is an example of the text for one page:

Nothing ever comes out the way I’d hoped

Everything turns out wrong

Even happy things are somehow sad…

It’s like there’s nothing at all to depend on…

I don’t know how other people would react to that but for me it sums up how I felt at 18 perfectly and married to the pictures takes on and becomes somehow beautiful. Maybe it’s just my relation to it that makes me enjoy it so much. 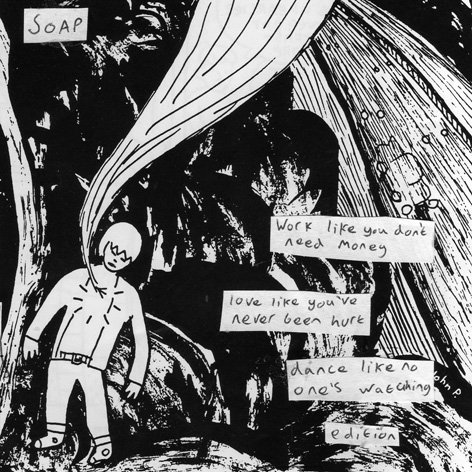 This is one of the covers of “Soap” our second album that I made from a scene in Perfect Example. John P. is hanging out with a group of friends and they all start drinking and having a good time. He doesn’t want to be there and isn’t drinking.  Good times. Again, I would’ve been the drunkest there but apart from that…

I think there’s a real poignancy to the work without any rose tint. He’s writing all in the present tense. He does tlak about things he enjoys;seeing friends who think everything else is ridiculous too (mine would Adam John Miller), hearing stories about Depression era America, the beauty of nature and stupid road trips. He enjoys them all but there is just an underlying sadness.

At one point at a party John P. asks;

“I wonder if life will always feel this strange?”

Here are ten games and questions you can ask yourself to pass the time. In no particular order…

Go Sigmund, it's your birthday...

1.Work out who hates you most in the world. Someone must just as there’s someone who loves you most, right?

2.What would it be like if you met yourself without knowing it was you? Would you get along?

4.Ask your friends the most debauched thing they’ve ever done and see if you feel the same way about them afterwards.

5.Imagine talking to your 14 year old self for an hour about your life now.

6.Compare your life now to your parents at the same age.

8. Think of the three people closest to you and what they need to do to improve their lives. Then try doing it for yourself…

9. Think about the most embarrassing thing you’ve done and try to stop feeling embarrassed by it.

10. Think of all the people in your life you’ve fancied that you would be embarrassed if anyone else found out about. Think about why for each of them. What does this say about you?