The Genealogy of Motherlover

Pop music. We enjoy it. We dance to it. It infects our brains as earworms. But how seriously do we take it? Do we engage with the serious questions it throws up?

Yes, some songs that raise serious questions in their titles and these are answered as a matter of course, e.g;

Travis – Q: “Why does it always rain on me?” A:”because you lack an umbrella”.

Bob Dylan – Q: “How many roads must a man walk down before you can call him a man?” A: 42 (as any fan of The Hitchhikers Guide To The Galaxy knows)

and so and so forth.

But what about the questions implicit in songs? These are the one’s that go unanswered. For example the Hollies sang, “He aint heavy, he’s my brother.” Yet we still do not know how heavy (or light) the brother in question was.

Who shot the Deputy?

Which leads me to The Lonely Island’s pop opus “Motherlover”.

Please take a second to familiarise yourself with our source material by clicking the link below, before we continue.

We know the boys are going to sleep with each others mothers. In fact they further this with the aim of impregnating each other’s respective mothers. All well and good. But the implicit question remains: What will the genealogical connection of these theoretical children be?

Firstly, we should set out the relationship between Andy Samberg, Justin Timberlake and their respective mothers.

We can clearly see that Mother Samberg and Mother Timberlake are Andy and Justin’s mothers, respectively.

Now if Andy and Justin were to mate with each other’s mothers and produce offspring our diagram would look a little like this.

Here it might be useful to define to our symbols: A downward arrow denotes parentage. A horizontal line with a heart denotes a sexual relationship that produced offspring.

Now, whilst technically accurate, Fig 2. does not really help us determine relationship. We must therefore, look at the cases of Baby Samberg and Baby Timberlake separately.

From Fig 3. and Fig 4. we can see the following

Assuming marriage between a) Mother Samberg and Justin and b) Mother Timberlake and Andy we would have:

ii) Justin and Andy would be each other’s respective Father in Laws.

iii) Mother Samberg and Mother Timberlake would be each other’s Mother in Law and Daughter in Law.

But what about Baby Timberlake and Baby Samberg. Combing Fig 4. and Fig 5., with Baby Timberlake as the end product and avoiding any unnecessary repetition of participants, we have the following:

and if we take Baby Samberg as the end product we have:

From Fig 5. and Fig 6. we see that Baby Samberg and Baby Timberlake are each others half-uncles and half-nephews; One’s mother being the other’s grandmother and vice-versa.

We can extend this further by considering both Mother Samberg and Mother Timberlake’s parentage and comparing these directly for both Baby Samberg and Baby Timberlake:

Finally, we may ask ourselves, what is the genetic relationship between Baby Samberg  and Baby Timberlake. Assuming we share 50% unique DNA with our full siblings (receiving 50% of our father’s DNA and 50% of our mother’s with the DNA given being normally distributed), then a child will share 25% of the DNA of one of it’s parents.

Adding these together we can see that Baby Samberg and Baby Timberlake will share 25% of their unique DNA. The same as half siblings.
In conclusion, it would be inadvisable for these Babies to mate as their offspring would have considerable risk have genetic illness.

James Lavender and myself often argue about the relative merits (or lack of) of The Simpsons since its (approximate) Season 1 -10 heyday. He thinks it stinks since 1998; I don’t. So I thought I’d show him what’s what.

Then I decided I might as well just prop up his point by going for the stupidest Simpsons episode ideas since Season 10.

Season 12 Homer becomes really smart after having a crayon removed from his brain. “HOMR” BABF22

Season 13 Lisa lies about her age and becomes a college student.  “Little Girl in the Big Ten” DABF15

Season 15 Homer pretends to be a robot to win Bart’s respect.  “I, (Annoyed Grunt)-Bot” FABF04

Season 17 Bart is kidnapped by an ape, who takes him as her son. “Bart Has Two Mommies” HABF07

Season 21  Homer wins the lottery and has to pretend he hasn’t for some reason. “Million Dollar Maybe” MABFO3 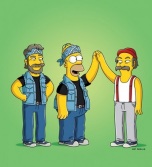 Season 23  Bart and Homer write a fantasy novel with some other Simpsons characters, for some reason. “The Book Job” NABF22